Howdy. My name is Mark, and I live in Dallas, Texas.

I’ve lived here some 40 years, but I was born in Maine and lived some years in New Jersey. For me as an outsider, Manhattan has always been that huge city on the east coast that only the brave would visit or endure to live in every day. I couldn’t imagine getting around everywhere all over the city—particularly on a subway. But my daughter and her husband have braved this endeavor, making it their normal day-to-day lives.

I had not visited them often, since they usually traveled to Texas to see me, and when I visited them with my wife back in the fall of 2011, they were our escorts, leading us around the city, taking us everywhere to see “all the sights.”

However last fall, I decided to take a leap and spend one of my vacation weeks “solo in Manhattan” to visit them—knowing full-well that I would be on my own during the day while they were at their respective jobs. My daughter had a plan. She would teach me how to use the subway, without overwhelming me, and with this tool, I could make my way through the city with purpose instead of holed up in the apartment all week with Netflix.

She carefully explained the basics, such as having a preliminary plan before you embark on your subway travels: Where do I want to go? Where is it in relation to me? Is it UPTOWN or DOWNTOWN? (I learned it’s not north or south since the island actually sits northwest to southwest.) Knowing the uptown/downtown bit was important, because armed with my free Manhattan subway map, I could tell which train I should enter when I was out on the street before descending into the train station. Who wants to go in the wrong direction? Exactly.

She also had me buy a metro ticket that would be good for a week and that paid off in spades.  I used the heck out of that thing and went everywhere my interests took me. Simply put, I wore myself out on several occasions that week doing the pedestrian shuffle through the streets of Manhattan.

On Sunday evening, the night before my first solo-subway ride, we made a quick trip to a local drug store. My daughter quizzed me on everything she had taught me about the use of the subway and I could see from her smiles and laughter that I was getting a passing grade on this pop quiz.

I started with something easy. On Monday morning, I rode the train UPTOWN with her to her work in SoHo.  I have a love affair with coffee so she pointed me in the direction of a local neighborhood coffee shop and bookstore down the street and off she went to work. After much walking about in SoHo, drinking coffee and seeing the sights I met her back at work for lunch on a rooftop café soaking in the sun, chatting, living the life of leisure. (It was my vacation after all.)

After lunch, I took the subway, DOWNTOWN to her apartment and took advantage of some of her building amenities until she and her husband came home for dinner. A good first start, I thought.
Tuesday morning arrived, and this was the day I would set out on my own. I walked her to her subway stop, gave her a quick peck goodbye and ventured off…alone… to the correct train going UPTOWN to the American Museum of Natural History. But when I came up out of the subway stop, I took a wrong direction and got turned around. But I actually didn’t mind. I saw some things I wouldn’t have seen if I hadn’t been lost in the first place. I was able to walk around in Central Park, watch people scurrying about going this way and that. I eventually decided to correct my direction with the street signs and soon found the museum. I had a grand time, and later when I got on the train again going DOWNTOWN, I knew that it was just the beginning of my Manhattan adventure.

By the end of the week I had gone UPTOWN, DOWNTOWN, taking the LOCAL and the EXPRESS. I even switched trains in larger stations so as to make my way from one side of town to the other. It was invigorating and life affirming that I could do this on my own. And of course, I walked and walked and walked. There were so many neighborhoods and all of them so walk-able, unlike the driving life of Dallas. I loved it. In fact, I found the city revealed herself to be quite inviting and open to showing me what was around the next corner. Indeed, the subway was the magic combination to finding the secrets Manhattan keeps securely tucked away for only those willing to venture out of their comfort zone.

This gorgeous city of individual neighborhoods, stitched together by the subway, where in just a few minutes you could be walking in the East Village or Tribecca, or SoHo—all of these places we’ve been introduced to by way of movies and songs that live on in our memories—they’re there for anyone to discover.

Loving and intimate relationships are formed by spending time together. and it’s the subway that gives you the opportunity—in a deeper and more intimate way—to get to know and understand the City of Manhattan or New York City, whatever you prefer to call “the maiden waiting for you on the East Coast.” 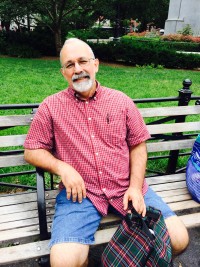 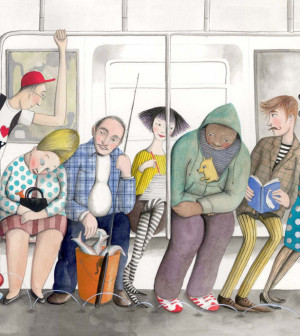 "Sophie Blackall is a Brooklyn based Australian artist. She has illustrated over twenty books for children, including Ruby's Wish (Chronicle Books, 2003) which won the Ezra Jack Keats Award, Meet Wild Boars (Henry Holt, 2005) which won a BCCB Blue Ribbon Picture Book Award and the Founders Award from the Society of Illustrators, Big Red Lollipop (Viking, 2010) which was a New York Times Top Ten Picture Book for 2010, and the ongoing Ivy and Bean series (Chronicle Books), which has over a million copies in print.

"Her editorial illustrations have appeared in the New York Times, the Wall Street Journal, the Washington Post, Time, Gourmet, Food & Wine, Town & Country and many others. Her latest project, http://www.missedconnectionsny.blogspot.com Missed Connections, which began as a blog in early 2009, is an ongoing series of paintings based on real, anonymous messages posted online by lovelorn strangers." —excerpt from Amazon.com