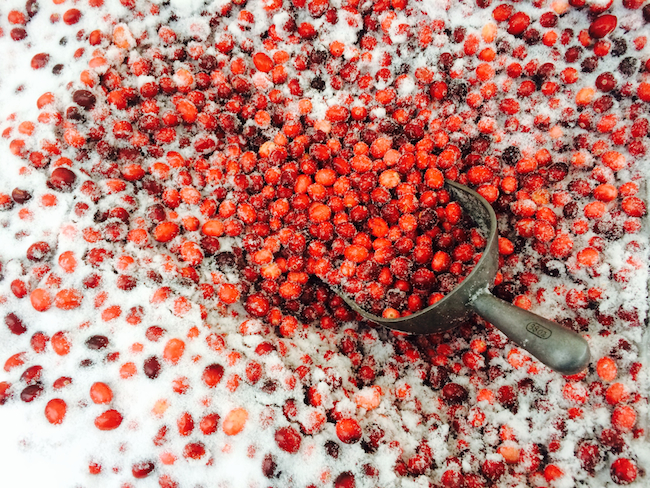 Who knew that cranberries would come to represent patience?

This wintery month of February marks four years in the Galavant Girl universe. What started in 2010 as a travel writing and video blogging assignment on the Italian winter, has become a place of love and appreciation for many with whom I’ve broken bread or shared an adventure.

When my original blog became technologically dated and difficult to use, I decided to put my long-term dream of having an online blogging magazine to the test. I had a lot of ideas, too many ideas. I mulled them over, sat on them, drew diagrams, and tried to figure out not only how I would ever accomplish this, but also, how I could lay the proper foundation for growth. I was stuck, until the cranberries came.

It was a snowy Saturday, and wrapped like an urban Eskimo, I headed to the open-air market for whatever I could find. The wind was blowing in multiple directions, and people were hustling as fast as they could to get from point A to B, but I couldn’t help but linger on the streets and move slowly. Something about the day just felt different. The cold air was clean, and the snow created a kind of city-soundproofing—a winning calm.

When I arrived, many vendors were closing up shop so that their produce wouldn’t freeze, but others were welcoming the free refrigeration the snow provided. The wind pushed me around a breezy corner stall and there they were: the most beautiful cranberries I had seen all season, lying cheerfully in a snowy bin. They were unreasonably beautiful, and I (along with close to 10 others) couldn’t resist snapping pictures. It might as well have been some starlet looking for yams. I bought two giant bags without hesitation, dreaming of all I could do with them and everyone I could share them with. I hustled back to the subway fueled with glee.

When I rose above ground and headed down the block to my apartment, I looked up into the snow falling from the sky and was struck with this awareness that somehow in that moment, I was living my life to the absolute fullest. I was filled with gratitude and began to cry. I stopped on the sidewalk, staring into the sky. My eyes stole snowflakes and packed them away into my memory jar. I was alive. I was complete. I was grateful. I couldn’t move. I didn’t want time to steal the moment from me. 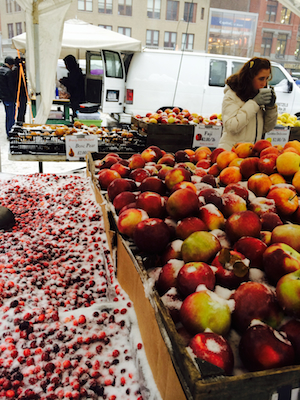 Over the next few weeks my kitchen became a little shop of cranberry cookery. I made cranberry compotes, cranberry chutneys. I experimented with savory and sweet. I ate them whole, tart, and delicious. I decorated our table with them, photographed them, and made Christmas gifts with all they had to offer. I discovered that to make the very best cranberry compote, you must let the berries simmer for near an hour, adding a little sugar at the onset, and then after 30 minutes, only adding sugar to taste. By allowing the cranberries to give of themselves in their own due time, it was not only tartness they offered but sweetness as well.

My family loved the compote, and I told them all about their need for simmering time and their ability to offer sweetness at the end. It was indeed a culinary holiday, we cooked, baked, rolled confections. There were chocolates for my grandmother, cookies from recipes passed down generations, there were meatballs and morning omelets. Over all of the feasting, we shared about our year and contemplated the continuing challenges. I was asked about the new Galavant Girl site and my book. I expressed that I just needed to solidify some work but I was nearing some conclusions. We simmered in ideas and fellowship. It was a good holiday, after a long and arduous year, and Lenny, my husband, and I were very thankful.

When we returned to Manhattan, I awoke to another snowy morning with a deep sense of clarity. I knew how to get the Galavant Girl blogging magazine off and running. It was very clear. I also realized that I had been very hard on myself, particularly with my indecision. But a gentleness had risen in me—a focus. I felt I was finally on the right path. I mentioned it to my mother by phone, and a couple of days later, I received a call from my father.

“I know you’ve been discouraged by the time it has taken to get everything accomplished for the Galavant Girl,” he said. “And your mother told me how you came to some clarity the other day. I was thinking that this process has been a lot like your cranberry compote. You just needed to give it the time it needs, boil everything down, so that it would all come into focus for you.”

He was right. The Galavant Girl endeavor did just need time, and so did I—to learn to be patient with myself, gentler. I thought about the day I bought the cranberries, standing on the sidewalk staring into the snow. How silly I felt, feeling at one with universe over such a small thing like carrying a bag of cranberries home on a wintery street. I asked a philosopher friend about it.

So here it is. Four years after my first Galavant Girl entry and I have met my goal. There has been a lot of transformation—mostly outside these virtual walls. However, I hope the elements of this new Galavant Girl home inspire, encourage, and lead fellow galavanters down a path of exploration and discovery.