Ideas of what I could or could not write pile up in my thoughts.

I am grieving the death of my grandfather, and at the same time mixtures of prose float in and out of my mind, blending into a mirage of something expressed without form and detail.

I look out the windows at the snow covered rooftops and mailboxes. Undaunted New Yorkers clad in rubber boots push past each other, to and from work, to and from home, to and from the bodega, the coffee place, the restaurant on the corner for lunch, to and from.

Ice Cream pops into my thoughts. I smile. I’m thinking about ice cream. My grandfather used to sing out with an puckish grin, “I scream. You scream. We all scream for ice-cream!” This was his motto regarding the cold, creamy confection, even though his body was laden with insulin dependent diabetes, and he rarely had the full-on sugared version. No matter. He still sang about ice cream.

I look back out the window. The snow is still drifting…my mind drifting. I’m back in the wintry months of my childhood, before my grandparents’ divorce, before the weather patterns changed in Texas&#8212before I really experienced any great change at all. In my grandparents’ back yard, there was an old iron grill that jutted up from the earth, just a few feet past the porch; just a few more feet past the old doghouse. As the snow fell, we’d watch it thicken incrementally, one snowflake at a time, never fast enough (never ever fast enough). After what seemed like an eternity, about one foot of fluffy white potential sat ready, and it would be time.

I was too young to know the recipe properly. I just watched my grandfather harvest the snow, and my grandmother would pour in magical ingredients. Sometimes I was able to add to that magic by taking a hammer to leftover Christmas candy canes placed inside a tea towel. It was a thrill to make such noise in the house. The wooden handle was too long for my hands, but I’d clumsily make do. I couldn’t help but to open the tea towel over and over to see how broken the pieces were. When small enough, the pieces would be added into the mixture, which was put back into the freezer, or back outside packed in snow, and we waited again.

Once I had my bowl, my spoon, and my share of the peppermint snow ice cream, I was in utter glee. I’d eventually take to shivering, prompting my grandmother to follow up the minty treat with something hot.

It was during the summer months, though, when we’d pull out the old hand-cranked ice cream maker. I’d watch my grandfather’s large muscular arms work the crank. I’d peer over the wooden exterior trying to figure out why salt was added to the ice. I’d always eat a bit of the salty ice. I couldn’t help it. I had to experience it all. Each step.

Later my father carved beautiful relief work into the outside of the wooden ice cream maker. I’m unsure if it continued to work, or if I just grew up and spent less and less time at home, but eventually that wooden relic of my summertime pleasure drifted into memory.

By the time I was eleven, my grandfather had moved to California, and it was then that I took a plane “all by myself” to be with him and have a grand adventure. We traveled up and down the coast on Highway One and explored all of Southern California. I was with him when I saw the ocean for the first time, visited San Francisco, jetted across the Golden Gate Bridge, trekked down to the Redwood Forest and into Disney Land.

We took a plethora of photos and in the last few days of our trip, created scrapbooks of our trips together at his home in San Jose. While we were gluing this picture here with those tickets there, we’d stop for a break and have ice cream. He would have the sugar-free kind. I’d ask him how it was, and he’d say smiling, “not as good as yours.”

The snow outside in Manhattan is not producing near the quality of snow needed for peppermint snow ice cream.  But, there is a bodega across the street that will sell me some ready-made ice cream if I want. I look at the pictures sitting on my desk. Some are photos I’ve taken in my travels; other frames carry pictures of my first published works; some lack a proper frame altogether. Today, I set a picture of my grandfather amongst the others. These are his accomplishments as much as mine. He encouraged these loves within me: travel, photography, writing. 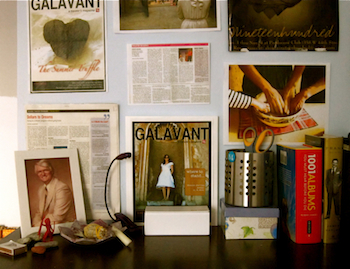 He’s smiling in this portrait—a beautiful Indian face topped with white-man’s hair. It’s good to have that smile with me. He had traveled to countless countries and 48 states in his lifetime. He said to me just this past summer, “You’ve got a lot of catchin’ up to do,” and he’s right.

I think I will head over to that bodega. I have a feeling Granddaddy and I will sit together often at this desk with ice cream nearby. I used to impishly bug him at his desk when I was a child, rearranging things, trying things, obsessed with his scotch tape. It’s only fitting he be here with me.

Elise McMullen — a.k.a. The Galavant Girl