The light in my apartment—meaning the light from two north-facing windows on my the fifth floor—would dictate that it’s impossible for me to grow herbs in my window.

That has proven to be false. This blatant disregard for universal physics and botany began with a simple grocery-store succulent. It entered my existence like this:

Working in television, I’ve fed many famous bellies. Once deemed “the green room girl” I can still tell you exactly how one celebrity takes their tea, how another loves sushi, and another cheese. I’ve decorated the rooms they’ve hung out in, re-upholstered couches at the last minute, and bought cribs and toys for little ones. I’ve had entourages trash my work in a matter of hours, and I’ve had other celebrities pull me aside and thank me personally for taking care of them. Shop, prep, feed, escort. Conduct search-and-finds, keep secrets, shield, and push. This was my job. In essence, I was a mother.

Last winter, a loud, big-hearted southern chef became my responsibility. And since I’m from the South, there was no way I was going to disgrace those roots and provide less than quality fare. I obsessed over the lunch table, and not only filled it with salads, crudités–and of course, chocolate chip cookies made with real butter–I also bought a small succulent to give the table some life.

The day sped on like a fury and twelve hours later when there was no need for the plant, the table, the stage, or even the staff, the plant looked at me as if to say, “Am I going to be as disposable as everything else around here?”

I took it home.

When we arrived, I talked to it. I told it that if it tried to live in my poorly lit window, I would never neglect it. Its tag had read, “bright light,” but for over a year now, it has lived in rainy light, bright light, no light, and grey light.

I was deeply worried when I left it for a month last summer without anyone to care for it. All I could do was water the dickens out of it and plead, “Please try,” as I rolled my suitcase out the door.

It tried… and lived.

I was then afraid that if I disturbed it—placing it in a new pot with new soil—that I might jinx it and kill it, so I left it in the same plastic container for almost a year.

After witnessing its drive and willingness, I could no longer excuse my self for not giving it a proper bed. I bought a decorative pot, replanted it, and waited. If this worked, maybe, just maybe, it could have friends.

It worked. I purchased two low light plants and placed them in the bedroom window. I made the same deal with them as I made with the first.

“Please know,” I said, “you will be loved and cared for. Please try to stay alive.”

Indeed these two stretched towards the light with such force, and exercised their will to live so blatantly, that I was inspired. We have a regimen, now. I turn the pots to give them more stretching to do. I dust their leaves, talk to them, tell them I love them, and pray for their survival when they’re not looking.

After a few weeks of plant yoga in the windows, I decided to risk… herbs. They were selling little basil plants in the grocery store instead of the cut herb. I thought about it. I weighed the idea. It was a ludicrous thought that basil would live, knowing that it loved “full sun,” but I rationalized that even if it didn’t survive, I would at least have some basil for a few dishes. Down deep my hope was bigger.

I used what I needed for a recipe, trimmed it, and placed the basil in its plastic cup in my window. Of course, I spoke to it, too. “I know that this isn’t ideal,” I said. Resolved to let-go-and-let God, I told my husband, “Everyone says that there’s not enough light. I guess we’ll see.” 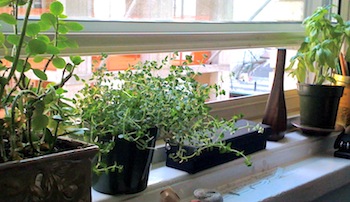 Two weeks later the basil plant was holding. I was astonished. This was madness! I thought. Incredible! My hope and courage grew, but at the market, I couldn’t leap. I passed the big flats of herbs and plants waiting for people to purchase them and take them home to wiling gardens. I still had doubts. Could we? I thought. Could it work? I went home empty handed.

The basil directly challenged me at week three. Still there, still drinking. Stubborn. Vigilant. Unyielding. Almost as if it was highly aware that it was an annual plant, and therefore it was going to enjoy this window as long as it was genetically possible.

The following week at the market, I lingered over the herbs. How could I disregard the possible now? I spotted some thyme. I would love to have thyme. I must have been staring at the plants for a while, because when the salesman approached me, I was startled. Before he could even ask me the standard, “May I help you?” I blurted out, “I have a miracle happening in my Manhattan apartment. I have basil growing in the window. I face north and I’m on the fifth floor between buildings.”

His eyebrows shot up in surprise. “Wow,” he said.

“So I’m thinking, if that’s happening, maybe I could try something else. What should I try?” He looked over at the flats of herbs.

“Well, if the basil is growing, the rest of these are a possibility.”

“Sure. And if you make sure you let the soil dry out before watering, like you’re doing with the basil, it should work.” I didn’t know I was providing this for my basil, but I nodded.

I chose a ringleted pot of thyme from a flat and headed home. Of course, I spoke to it.

“Strange things are happening in my window,” I said. “The plants are making it. Even the basil. I would love for you to try. You’ll be loved, and I promise to only take what I need, and not right away.”

I wonder if I have the same willingness to continue that kind of stretch to the light. I’m not sure. I do know that if I start to forget, the teachers in the window will show me how. 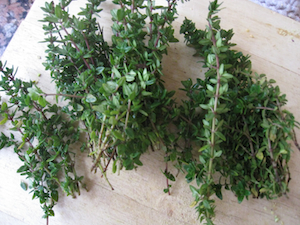 1 stick of good sweet cream unsalted butter (I like to use Beurre d’Isigny for this recipe.)
2 tablespoons fresh herbs (thyme is used here)
1 teaspoon of sea salt

Method:
Bring butter to room temperature. Prepare your herbs. Here I took fresh thyme and pulled off the little leaves from the stems, then mincing it further with a chef’s knife. (Whatever herb you choose, taking a chopping knife to it enables the oils within the herb to be released, and allow for easy spreading.)

Add the softened butter, herbs, and salt to a bowl and stir until nice and creamy. Cover, and let stand in refrigerator for at least one hour to allow the oils of the herbs to flavor the oil in the butter. Yum. It’s ready.

Uses:
Extremely versatile, and easy to make, herbed butter is worth having on hand in your fridge throughout the year. It can be spread onto some fresh crusty bread and served with a meal, or a tablespoon of it can be thrown into vegetables cooking on the stove for additional flavor. It can also be spread all over a whole, patted-dry chicken for roasting, rendering a flavorful, golden brown skin, and succulent meat.

One caution: Using sweet cream butter and adding salt always yields a better flavor, than using salted butter. The salt acts on the herbs to heighten their flavor, but does not overpower it.